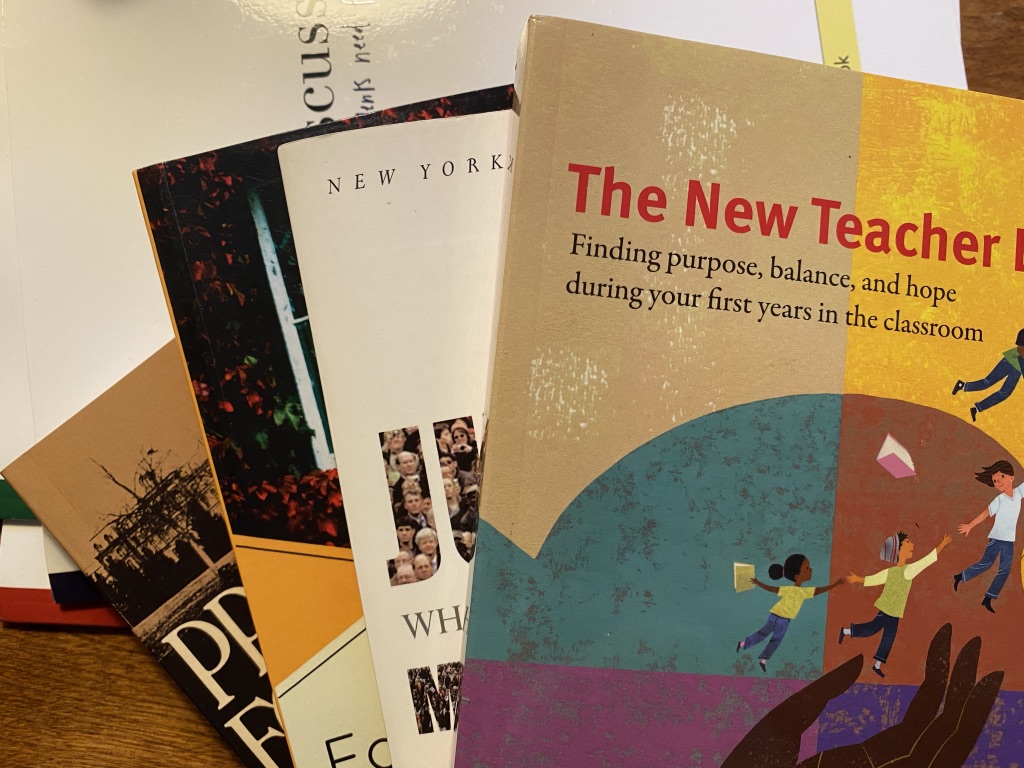 Beyond the Syllabus posts offer a round-up of resources that are “practice-adjacent,” as Katherine often says. We offer recs for podcasts, fiction and non, and TED talks that offer delightful – if surprising – ways to rethink or enrich discussion practice.

Book Eugenia Cheng, The Art of Logic in an Illogical World. Mathemetician Eugenia Cheng believes that understanding logic can change the way that we speak with one another. Arguing that the commonly upheld binary between logic and emotion is false, she suggests that we would all communicate more clearly if we more actively integrated both. Through diagrams and specific examples — imagine fractal trees explaining levels of societal privilege — Cheng illustrates the nuances in common disagreements. Then, she teaches her audience to use logic to solve them by identifying solidarities and disagreements more effectively. Emotions are not irrelevant to this process: rather, they are both the spurs for logical processes and the ultimate consideration in logical discussions or decision making. For teachers, especially teachers of the humanities, The Art of Logic can inspire new ways to guide students toward clearer, more generative discussions of complex issues — the kind of discussions which Cheng rightfully sees as all too rare in contemporary society.

Humor Sue Granzella, “Foolproof Safety Tips for Teachers Returning to the Classroom.” Granzella’s satirical listicle is a timely. enter She imagines a teacher headed back to school during the coronavirus pandemic. Suggesting “one dozen unwrapped throat lozenges” stored in an “inner mask” to deal with a voice made hoarse by shouting into a microphone, Granzella oscillates between the physical and emotional stressors teachers might take on in the next few months. Bonus points for the suggestion to “secure six concentric circles of pillows around your midsection” so that a child in distress “can lean against the outer pillow-circle” for emotional support. Granzella gets it.

Article Rebecca Jennings, “The not-so-secret life of a TikTok famous teen.” Vox’s feature from last fall, on a teen named Haley who is “a little bit famous,” shows not only how teenagers become what’s called “TikTok famous,” but also why they want to so badly. In most schools in America, teenagers’ motivation for such fame outweighs their motivation to learn, and Jennings wonders if this aspiration t can inspire teachers to think differently about what inspires motivation in the 21st century. The jobs that Haley and her friends want one day, the article explains, is to “have the kind of social media following wherein performing your life online becomes a paying job.” Though TikTokers like Haley aspire to build up paying empires through YouTube or Patreon, TikTok, the article describes, is a medium that works with a busy, “normal” high school life. Fame on the app produces envy from peers. Creativity and control are also desirable features of the app. We like Jennings’ article for its explorations of the emotional draw of the app, and for the ways in which it reminds us of the fundamental needs and desires of the students with whom we work each day.

Preparing to teach on climate change, bias, and Afghanistan this fall.

The value of norms, respect, and safety, in our country as in our schools.

This week’s Beyond the Syllabus pinpoints three bright fires worth approaching more closely. Book Cathy Park Hong, Minor Feelings: An Asian American Reckoning. Even before the Atlanta shootings rocked the United States with another round of debates over gun violence and what is or is not a racially-motivated violence, Hong’s collection of essays was a…